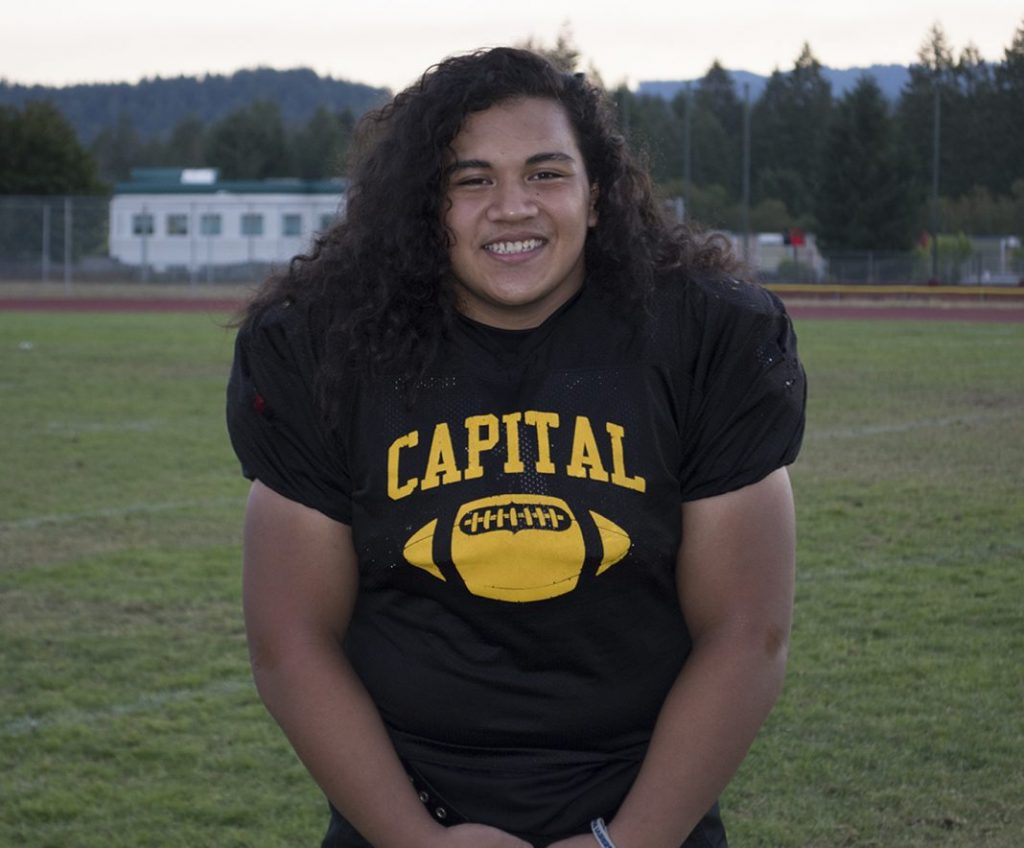 It was a sink or swim scenario for David Ainuu. During his freshman year at Capital High School, Ainuu, admittedly, may have had a little too much fun, neglecting his studies along the way.

“Grades were just secondary for me back then,” Ainuu said. “Sports were everything.”

This did not sit well with his parents who tackled the problem head-on and enrolled their son in Running Start, a program giving students the opportunity to take college courses while attending high school.

Ainuu was either going to crack down on the books in a much more difficult environment or drown in the process.

Turns out the kid can swim with the best of them.

“They threw me right in and at the time I was mad at them because I was really into the social aspects of high school,” Ainuu recalled, “but once I started getting into it and doing the work I didn’t care as much about what I was missing out on socially. I really got into academics. It affected me. I didn’t think I was going to play (football) my sophomore year because of my grades. It really changed my outlook.”

Ainuu is now a dual threat – equally successful in the classroom and on the field – and while he makes everything look effortless on the gridiron when he plays, the road to get to this point was a challenge.

“It’s been really tough, especially now as I look back,” Ainuu said, “but if it wasn’t as tough I don’t think I’d be the athlete or the student I am now. I had to work for everything, both in sports and in education and I think that makes me appreciate things more.”

A first-team all-league selection at defensive end last year, Ainuu will be a one of the 3A South Sound Conference’s top two-way lineman this season for the Cougars.

“He’s just a physical, hard-nosed kid who also happens to be really humble,” Capital coach John Johnson said. “He has a great attitude and always puts in a ton of effort. He has that mentality of working hard and getting after it. He just does what he needs to do.”

With his long, thick dark hair sneaking out of the back of his helmet, Ainuu, at 6-foot, 265 pounds, is easy to spot on the field and while he excels in football, he knows his future lies elsewhere.

Ainuu is also a standout rugby player who has several collegiate programs clamoring for his attention with Army West Point establishing itself as the current leader.

“We know (rugby) is going to be his focus,” Johnson said. “If something comes through for football he’s going to look at it, but we know his future is in rugby.”

But that’s not to say Ainuu won’t wreck any less hectic in the trenches while giving everything he has to the Cougars football program this season.

“As of right now I’m set on traveling the rugby path,” Ainuu said. “The main thing for me with football is to just create the bonds with the guys. I just want to cherish the time I have with them. Win or lose, these guys are my brothers.”

It was Ainuu’s actual brother, Dylan, who first introduced his younger sibling to the world of rugby – albeit reluctantly.

“At first I didn’t want to play rugby at all. Football was everything to me,” Ainuu said. “I started off as a waterboy for my brother’s club. People don’t believe me, but that was my first taste of rugby. It just grew from there.”

Ainuu, who plays rugby for Renton’s Liberty Patriots club, quickly excelled at the sport and by his sophomore year was playing for the USA High School All-American under-17 squad.

It was through his play with the All-American team that Ainuu captured the interest of Army West Point rugby coach Matt Sherman, who coached the squad during their 2015 trip to France.

“I am seriously thinking about,” Ainuu said about potentially playing at Army West Point. “Financially it would take the burden off my parents and it would just be a great opportunity for me.”

No matter where he ends up playing rugby in the future, Johnson knows Ainuu’s background in the sport will benefit his Cougars greatly this year.

“Being on the line is a good place for him because it’s just like a rugby scrum,” Johnson said. “As a sophomore he started making plays on the field for us as a nose guard. Last year we moved him to defensive end because he has that athletic ability from playing rubgy. He can run in space and in our system this fits him better. He can just come off that edge and pin his ears back. We could probably put him anywhere and he’d do great things for us.”